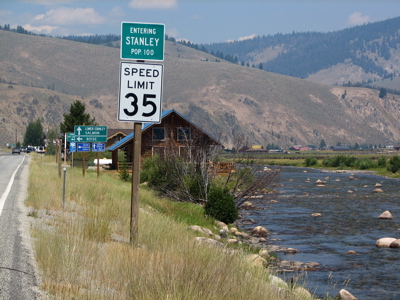 The self-serve water dispenser is the first thing I notice at the Stanley Baking CO. & Cafe. Having just cycled nine miles on Highway 75 from Idaho Rocky Mountain Ranch, the free water is a welcome sight. The restaurant, like all of Stanley, Idaho, does not have a bike rack. However, I’m not concerned about my bike being stolen. Maybe it’s the Tibetan prayer flags flapping in the breeze beside the Bakery and subduing my anxiety. Or it’s the looming Sawtooth Mountains that are always watching and keep the bike thieves at bay. 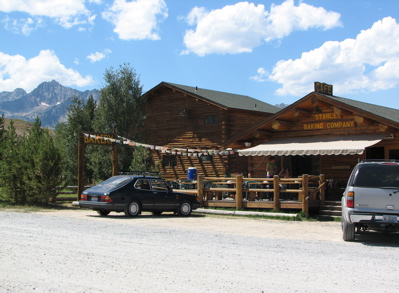 The inside of the restaurant does not have the usual dead animal motif. In fact, I couldn’t find any fur or scales on the wall. The only thing dying on the wall are pictures of snowy Sawtooth Mountains and an aging Dali Lama. The Sawtooths in the pictures are covered in old winter snow that hangs on throughout the summer. Now summer snow peaks are as rare as the returning salmon. Like the rivers that need the Fish and Game fish hatcheries to help maintain a semblance of a healthy stream, the mountains will need the Forest Service to haul up snow making equipment to keep the peaks looking majestic. 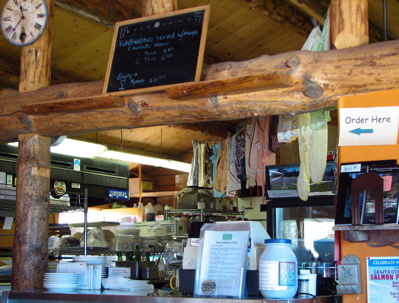 While waiting for my omelet, I notice the aprons strung across the kitchen. The aprons remind me of the recent MaryJanesFarm magazine and the words of Jeannie Pierce: “Seeing a woman wear an apron lets you know she loves to create. Her creations may be pies or paintings or pottery, but she also produces an aura of comfort, ease, and curiosity. You just naturally think, ‘What is she making?” The cooks in the kitchen created a delicious omelet made with feta, cheddar, and tomato. 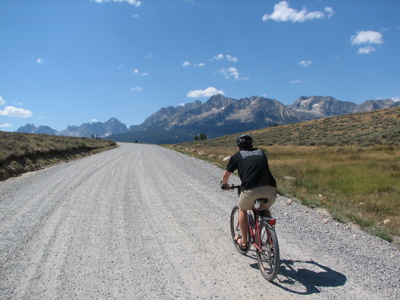 After breakfast, I follow the dirt road from the Stanley Baking Co. & Cafe towards the mountains. The road becomes steep and bumpy leading up to a plateau, and the view from the top is worth the leg burn. The view is so amazing that some sort of human structure had to be built. Instead of a large house, a meditation chapel was erected, open to weekly church services and private special events. Next to the chapel, there’s a park. I choose the swing set over the chapel. I’d like to meet god swinging through the air, pretending that I’m a teenage sparrow rather than listening to a man dressed as a politician speaking god’s will.

Riding down the hill from the park, I pick up speed quickly. In a blink, I might cruise through the town of Stanley and end up back on Highway 75. I dash madly down the hill past the Bakery, then apply the brakes and turn left at the stop sign because the library is a great place to hang out.

The library keeps unusual hours. Luckily, today the library is open with two chairs unoccupied. With the library being so small, they wisely chose to fill the space with books instead of couches or large sofa type chairs. Sometimes when I’m at other libraries and the book I want is not available, I think, “Maybe if there weren’t so many chairs there would be room for the book I asked about!” The library has a small amount of magazines, but once again the librarian was thinking about space. Instead of filling up precious room with People or Vogue, there are copies of magazines like the National Geographic and Smithsonian. I pick up a magazine and read about people celebrating the 50th anniversary of Jack Kerouac’s On The Road. I decide it’s time for an afternoon cocktail.

There are two bars close to the library: The Rod-N-Gun Saloon and The Kasino Club. The Kasino Club has open mic on Thursday nights and it happens to be smoke free. The Rod-N-Gun Saloon is not smoke free but opens at 2PM. I’ve been a fan of the Rod-N-Gun for a number of years. When I got my first poem published, Johnny Ray (the owner) let me recite it on stage. Back then, along with two of Stanley’s former mayors, Johnny Ray used to be in a cover band that played on the weekends.

At 2PM nothing’s happening. Johnny Ray and his wife are trying to talk me into buying tickets to see the comedian, Jason Resler, who’s appeared on Comedy Central and will be appearing at the Rod-N-Gun tonight. I’d go to the show, but I don’t feel comfortable riding my bicycle at night while sharing the highway with deer and drunk drivers. 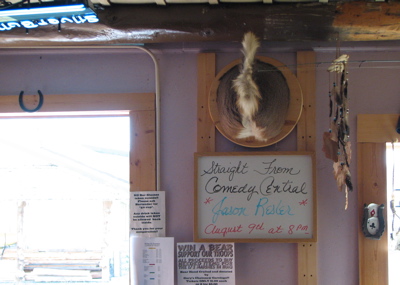 I order a cranvodka and listen to Jane’s Addiction on the jukebox. Part of the ceiling is covered in women’s panties. I can’t find a good quote about panties in MaryJanesFarm magazine. If panties had a pocket on the front, they could act as aprons.

Here’s another quote by Jeannie Pierce from MaryJanesFarm magazine, edited to fit the context of the panties at the Rod-N-Gun Saloon: “With my panties, I carry snap peas, peppers, and cherry tomatoes after picking. I wipe my hands while canning and baking. I store tissues for my granddaughter’s occasional runny nose. My panties even give me a place to park my thimble and quilting thread. They make me feel like being busy with my hands.” I get my hands busy by taking the straw out of my cranvodka. Now I have to bring my drink to my lips. My afternoon cocktail gets me through $1 worth of Jane’s Addiction songs. I decide it’s time to go because trying to focus on riding between the white line and gravel edge of the road for nine miles can be a challenge sober much less buzzed.

photo album of our stay at Farm Ken

All Thai people have nicknames, so I’ve felt a bit out of place for the past three months traveling in Thailand without one.  My new Thai nickname is Gina, thanks to Ken and his middle-aged memory.  I met Ken a week ago when Brandon and I arrived at his farm in Chiang Rai, Thailand as volunteer WWOOFers (willing to work a few hours a day in exchange for room and board).

From the e-mails exchanged, I knew to expect an orchard, a small garden, and some construction projects at Farm Ken.  In the eight years that he has lived on the farm, besides planting countless avocado trees, Ken has constructed two and a half houses.   Along with two other WWOOFers, Brandon and I arrived in time to help out with the painting, sanding, and lacquering of Bunker Hill, a house being built into a hillside on the property.

Prior to our stay at Farm Ken, we had learned some practicalities of organic farming while working at MaryJanesFarm, but our only construction experience was a weekend cob-building workshop. Growing up, I had watched my dad paint our house, and Brandon built a birdhouse once when he was a kid. At Farm Ken, we experienced another version of MaryJane’s make-do attitude.

The jobsite at Bunker Hill was created around Ken’s no-frills, make-do attitude.  Besides learning some new skills, we’re hoping that we’ve picked up some good work habits along the way. 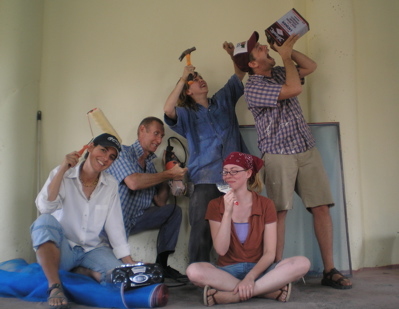 Ken is one of the few people in Thailand who doesn’t own a rice cooker.  He has improvised a toaster that works great if you don’t mind the smell of burning breadcrumbs.  This homemade toaster symbolizes Ken’s general approach on the farm: function is more important than fancy, and make-do with what you have. 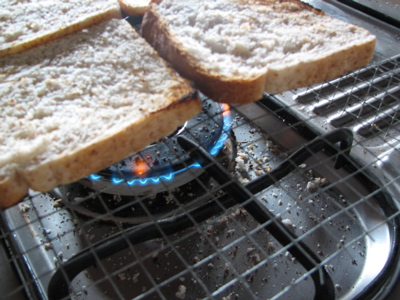 Volunteering on a WWOOF farm isn’t all about work; there’s plenty of time for socializing, too.  Brandon and I shared some of our omelet ideas as well as a few of our travel documentaries.  Ken shared his novel inspired by a long-lost Burmese lover and the ideas of other literary projects in various stages of completion.  Brandon brought out his travel-sized Martin guitar, and we found out that Ken is also a musician.  He can play guitar and sing any Elvis or Beatle tune you name, as well as a few originals.

In addition to his building, gardening, writing and music, Ken has many other interesting projects in the works.  The bicycle that goes on water is still in the design stage, but his special bamboo drumsticks have made it through production and onto the world market.

Ken believes strongly in the superiority of his bundled bamboo drumsticks over other drumsticks, given that bamboo is stronger than wood.  His claim is that they won’t break on a rimshot like wooden sticks do.  In Thailand, bamboo and labor are easy to come by, but the distributing of the drumsticks has been more of a challenge, so as volunteers on Farm Ken, we agreed to help market the “Thai-Sticks.”

With our camera and passion for filming, combined with Ken’s faith in his product and scientifically-designed experiments, we turned our attention from painting Bunker Hill to filming our first advertisement.  A few minutes into filming, gravity shifted, and the direction of our film shifted, too.  Similar to how American Movie is a documentary about a man desperately motivated to make a horror movie, our short film became a commercial about making a commercial.  It’s about a good-natured guy doing his best to prove the superiority of his product while one enlisted helper expresses serious doubt along the way.

After three drumstick experiments, two days of filming, and endless discussion, we ended up with a 10-minute film about the making of a drumstick commercial.  Whether or not we were able to prove that Thai-Sticks are stronger than wooden drumsticks remains up to each individual viewer. Click here to check out the short film “Thai Sticks.”

Here is the 30-second lowdown in Thai-Sticks, the bundled bamboo drumsticks.  For more info: http://www.wonderfull.com/stix.htm

By author Ken Albertsen, Lali’s Passage is the story of a Burmese beauty who escapes from a brothel to Native American hills of California.  For more info:  http://adventure1.com/showlali.htm 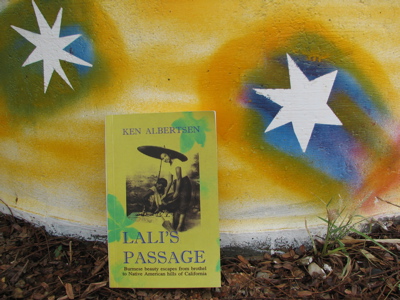 In another section of the import store, there were pieces of intricately carved wooden furniture that, according to Lali, would be more accurately called Burmese rather than Siamese, as labeled.

Tim already knew his gal was special, but every day new facets were unfolding that entranced him further. “Did you learn these things from reading books in Thailand?” he asked. She must have misunderstood the question because she responded that Burmese people love to read books, whereas Thai people usually only read if they have to.

Another endearing trait was the way she would make little flower garlands – sometimes using a thread to string them up – other times using just their braided flower stems. If it was a short strand she would place it on the crown of her head. A long strand would drape over her shoulders, falling onto her chest. Adding an aromatic floral garland to an already beautiful lady like Lali was like adding rainbows to a bird of paradise.

Seeing the Burmese artifacts had reminded her of home. They tried using Tim’s calling card to reach her mother’s village in Burma, but to no avail. The junta there was not allowing incoming calls from the outside world. Perhaps they thought that keeping foreigners at arm’s length would lessen scrutiny of their regime. Interestingly to Tim, Lali seemed to accept the military dictatorship in her native country in a sort of devil-may-care sort of way. Rather than risk arguments, he had decided early on, not to get heavy-handed or to talk politics with his new sweetie.