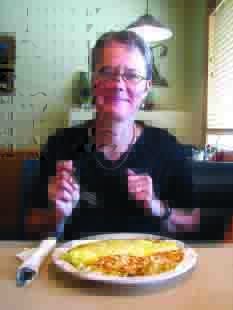 I never thought politics, omelets, Republicans, and Democrats would mix at the Sunrise Cafe. On Saturday, the mind and the belly joined forces with the support of representatives in the Idaho Legislature, Democrat Nicole LeFavour and Republican Kathy Skippen. I first met Nicole through poetry and then had the pleasure of helping during her 2004 campaign. My favorite memory of the campaign was giving Nicole a pump on my bicycle through District 19. Since Nicole is running unchallenged this fall, it has allowed her to help other candidates seeking reelection, like Kathy Skippen, who is, to my surprise, a Republican. Despite the walls built by Rush Limbaugh and his equivalent on the Democrat side, Nicole and Kathy demonstrate that the well- being of Idahoans comes before rhetoric. After omelets, a crew of about 15 supporters of what-makes-sense-for-Idaho went on a lit drop. Please check out Nicole’s website at www.4idaho.org. I hear Nicole and Carol are in France unionizing. Best of LUCK!!!!

If peace talks ever do begin between the world’s evil doers, I hope the discussions start off over omelets. George W. Bush would bring the eggs from his ranch; the Israelis and Palestinians would bring olives; the Iranians would bring oil for the grill; Osama Bin Ladin would bring goat cheese. If the evil powers can come together, make omelets, and eat at the same table, maybe there is hope for a global society. 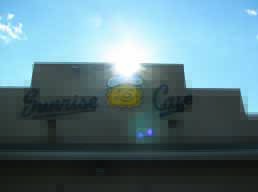