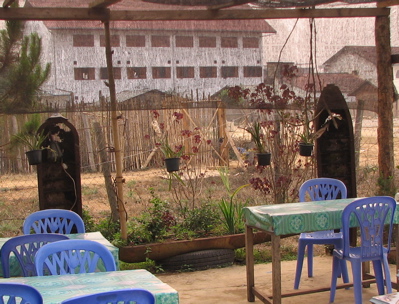 At the Kong Keo guest house in Phonsavan, Laos, a row of planter boxes made from bombshells separates the outside patio from an old airstrip. Some bars and restaurants in the U.S. mount guns on the walls, but the guns probably have never been used with the intent to kill people. What an odd omelet thought to know that these bombs were intended to kill omelet eaters just like Amy.

The omelet comes inside a baguette, the first of many omelets cradled in warm bread while traveling in Laos. It has the right combo of fresh carrots and pepper. The taste should take me into a moment of pure omelet indulgence, but there is a familiar sadness to this place and a nagging from the past, like I’ve been here before. I wonder if at one time I could have been an Air Force pilot or Army soldier involved in the secret war in Laos? Then went back to the USA and shot myself in the head to become another number in the embarrassing statistic that more Vietnam veterans have killed themselves than actually died in combat?

Having been raised Christian, it’s hard for me to grasp the idea of past lives. Anyway, a victim of a screwed up war and suicide would most likely be in purgatory, confused, with one hand reaching toward the devil’s tit and the other toward Jesus’s warm heart, instead of eating an omelet in Laos. There’s got to be another reason for the familiar feeling of sadness. On the table I notice an ashtray made out of a bomblet. Bomblets are small round canisters that are released from a cluster bomb, a weapon that many nations are in the process of banning. Besides the obvious problem of dropping bombs on people, a lot of the bomblets do not explode on impact. 35 years later, little kids find the unexploded ordnances while playing and blow themselves up.

The familiar feeling of sadness becomes even stronger as I reflect on an article I read last summer about Israel pulling out of Lebanon and dropping cluster bombs on the border villages. Now, like the Lao kids, Lebanese kids are blowing themselves up after the Israeli withdrawal. In both cases, the cluster bombs were made in the USA.

The other day, I read an article about an international cluster bomb meeting. Countries around the world have signed an agreement not to use cluster bombs. Two countries did not attend the meeting: USA and Israel.

I hope the United States and Israel change their military and foreign policies, so that next time I experience a familiar feeling in a new land it will be one of pride and happiness. 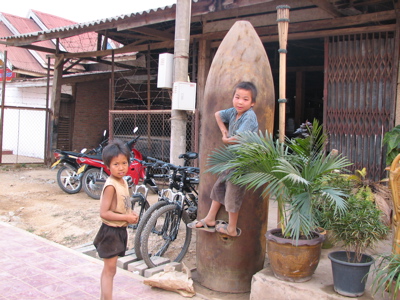 Cluster bombs kill in Iraq, even after shooting ends

**Take Action: Ban the Bombs that Keep on Killing show your support for the Cluster Munitions Civilian Protection Act of 2007**

Bombs, Jars, and Omelets photo slideshow. After eating omelets, we visited the Plain of Jars, a tourist site in Phonsavan, Laos. Music by Veronica and the Mental Foreplays.