While eating an omelet, I heard an Oink-Oink 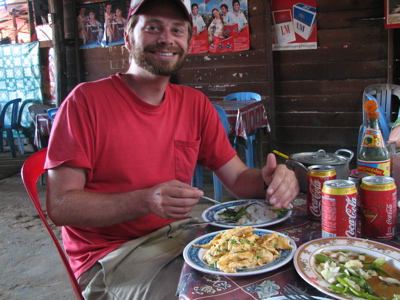 I’m eating a Cambodian-style fried egg omelet with steamed rice and vegetables on the side when I hear an oink-oink.

Excited, I get up to follow the animal sounds. Usually in the States, food is trucked in from places all over the country. Not only does a person eat an out-of-state pig, a Texas farmer might have given it large amounts of drugs, an awful farmer’s teenage son might have made sweet love to the pig in Mississippi, and the pig might have eaten its own disease-ridden, dead mother in Ohio. Finally, you scarf its remains on a hung over Sunday morning, take drags off your smoke in between bacon bites, and wash down the last morsel with an orange juice drink that tastes like flavored sugar water. I don’t eat pigs, but I’ve lived with similar horrific thoughts about a leaf of spinach. 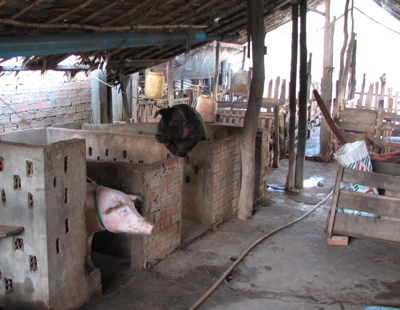 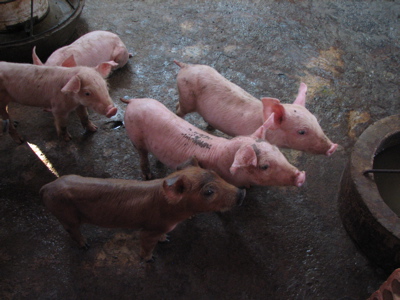 I make my way to the back of the restaurant where the smells become stronger and the flies swarm thicker. Just past the restrooms, I find a pen of five little pigs all looking up at me and wanting to be held. I almost pick one up and hold it close to my bosom, like Tory Amos in the Boys for Pele album. All of a sudden, a big brown pig appears over the sidewall of its stall. His eyes follow me, like a grade school teacher who could have looked at twenty other students but chose me for no apparent reason. Stop staring at me, pig!! Why don’t you stare at the other pigs or the chained-up monkey?

I would like to eat all the pigs to take them out of their misery, much like I do when I see a cluster of miserable over-ripe bananas. I return to my meal to find it infested with flies.

To watch a video of this omelet review, including the pigs and chained-up monkey, click the photo below